Here’s an edited transcript of Stella’s presentation which was featured in the symposium: Transnational Lived Citizenship Through Creative Production.

We hope you find the presentation an interesting read!

“I’m proud to be the Creative Director of Community Arts North West (CAN), joining in 2018 from a freelance career and roles at London’s OvalHouse (now Brixton House). At both CAN and Brixton House, I’ve worked closely with artists and communities with lived experience of forced migration. 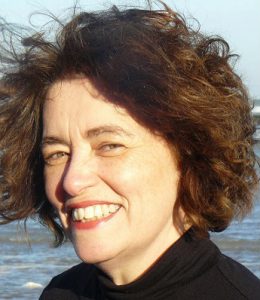 CAN has a 40-year+ history of working with communities and artists in Greater Manchester and is rooted in antiracist principles. Our work is influenced by and addresses human rights, systemic racism, and the negative impacts of government policy. Our work is underpinned by an interrogation of ethics and representation; an interest in activism and a commitment to standing in solidarity.  CAN’s pioneering Exodus refugee arts programme was launched in 2004. It was one of the first programmes of its kind in the UK, receiving investment from a major foundation.

I’m a second-generation migrant and grew up around family members who came to the UK as refugees. I’ve worked in the field of arts and migration for over 20 years.

I come from a position of privilege. As a White and British-born artist and arts leader, educated in the UK, I’ve access to funds, space, resources, forums, influence, and the ears of people with power.  This is denied to many.

My career has been free from many, but not all barriers.  I’ve never been described as an “emerging artist” or as a “white artist”. My work has rarely been pigeonholed into a specific month or week of the year. There’s never been an expectation of me to draw on any personal trauma in my work.

I’d like to reflect on the last few decades

During the early years of this century, due to systemic racism, there were very few people from ethnically diverse backgrounds in leadership positions in the cultural sector. This has improved to a small extent, but leadership still lacks diversity, and the sector has continually failed to address systemic racism.

When work responding to the arrival of refugees in the UK emerged in the 1990s, there were hardly any artists with lived experience of forced migration in paid roles in the sector. The artistic and cultural response was almost entirely White-British-led.

In response to the arrival of refugees fleeing conflicts in the late 1990s and early 2000s, artists and arts organisations began making work about refugees. I saw a lot of theatre, almost exclusively created by white writers and directors. Almost every piece depicted a refugee character being horribly treated and then attempting suicide.

It was deeply problematic and contrasted strongly with my direct experience growing up and then working with people who’d experienced forced migration. In Q&A sessions I asked theatre-makers why they made this choice. They often talked about their attempt to provoke empathy. There was often little analysis about the representation of refugees as victims or about the purpose or value of empathy and none about the lack of involvement of people with lived experience in the development of the narrative.

Sometimes the reasoning was about challenging hostility. I questioned this, as I didn’t believe that anybody hostile to refugees would come to the theatre to watch this work.

“It invites them (the audience) as does any melodrama to reward themselves for Seeing That the Villain’s Bad; and, in the Liberal Fallacy, of feeling this perception is a moral accomplishment.”

The White Gaze is also strongly present in participatory arts practice. Many projects focus on the refugee story, especially the story of trauma, again focusing on victimhood. This removes agency from people with lived experience to define the creative process and material.

In some ways, the dominance of this style of work has held back progress.  There’s been a slow and gradual shift in the sector that’s seen people with lived experience leading creative processes, receiving funding and establishing their own organisations. The White Gaze has been challenged, but not dismantled.

Without people with lived experience occupying leadership and having agency in creative projects, there’s always the potential that work will be presented through the White Gaze, perpetuating problematic narratives, and playing into a “white saviour” complex, leaning towards provoking empathy, rather than challenging injustice.

Borders, and the land between

As a small organisation, CAN and others like us, sit in a kind of “no man’s land” a place between communities and artists and larger institutions and resources. It’s a land between two borders.

“The Land Between” is an interesting place and not without its hazards.  It’s a place where we can see both borders and with a good and powerful lens, we can, to an extent, view and identify the systems and structures that exist in “The Land Beyond”. The border between the two spaces has gatekeepers and there are rules – not often transparent – to make the journey difficult. If you do manage to pass into “The Land Beyond”, an even more complex system awaits you. This system is built on a cultural hierarchy that puts Whiteness and Britishness at the top. “The Land Beyond” favours artists who make work within an accepted aesthetic and articulate their practice in a codified frame.

I’m not saying that there aren’t structures and systems in our space – “The Land Between” – and some of them are equally problematic. Many of us working in this land have been raised and educated in a culture of White Supremacy. We make big mistakes, but we can try to avoid mistakes by committing to co-creation and accountability.

Within “The Land Between” organisations and artists are competing for diminishing resources. We navigate a funding system, much of which supports and maintains existing power structures. Some of which actively oppose any work that’s political or seen as activism. A recent article in Red Pepper describes how the organisers of the London Migration Film Festival were rejected by a venue because of their “policy of political neutrality”. There’s no such thing as neutrality. This landscape is a huge challenge when our work intersects with human rights and where the people we work with are directly threatened by government policy.

CAN’s work in The Land Between

CAN’s work stands in solidarity with people at the sharp end of oppression, both here and in other countries, including artists whose work has been banned in their country of origin, who’ve navigated “Fortress Europe”, who are experiencing a hostile environment and who are undocumented.

Our work is founded on the principles of co-creation and establishes semi-permanent or temporary communities of displaced people against a backdrop of hostility. For example, CAN’s intercultural children and young people’s programme creates a family of those from new and more established communities. The work is based on young people’s agency and their choices about the creative process.

We believe in provocative and political work. Our creative programme aligns with activism and challenges people to act against the Hostile Environment and supports campaigns like Anti Deportation, Climate Justice, and movements like Black Lives Matter. Sometimes CAN’s work is in direct support of campaigns and sometimes it’s a platform for artists’ politically engaged work.

Our work interrogates complex issues of belonging and un-belonging. Through our Artist-In-Residence programme – capacity building –  we’ve supported organisations like the Amani Community Choir which works intersectionally with lesbian asylum seekers who experienced exclusion due to immigration status and homophobia, sometimes within their own communities.

CAN’s work is often uncomfortable work, that disrupts like Still I Rise, a collective exhibition by international women artists. It disrupted the mainstream space of Manchester Art Gallery by challenging the exclusion of women and artists of colour.

Even though “The Land Between” can offer opportunities for artists and communities to drive cultural production, most people we work with want to access the organisations that lie beyond: the higher profile and more resourced institutions.  Some of CAN’s work facilitates and supports this journey.  By working together, with artists and communities, we try to create a bridge, but it’s not always a very stable bridge.  The bridge can lead to a place of systemic racism, the White Gaze, and other exclusions.

Sometimes CAN is invited to the table. We sit with cultural organisations with more power and influence. This gives us a voice and a small amount of influence. But I know my seat at the table is largely due to privilege and sometimes I’m asked to speak on behalf of the people who are uninvited. I say things that make people feel defensive or uncomfortable. Sometimes I worry that I won’t be invited back. Sometimes I feel I don’t want to be invited back because I feel by being there, I’m part of the system.

So, this is the reality of “The Land Between”. It’s a space where alternative ways of working can be developed, where hierarchies can be disrupted or rejected, and where sometimes people decide to stay or return to and reject “The Land Beyond” – the second border – and create an artistic life between borders, in a place of resistance.”