CAN supported the African-led arts organisation, Amani Creatives, over the course of several years through our Artists-in-Residence programme.

Led by Emmanuela Yogolelo and Serge Tebu, Amani Creatives develop artists of African genres and promote them through professional showcases. In addition, Amani Creatives deliver a programme of community engagement using the arts and culture as a tool for well-being, cohesion and social change.

In 2016, CAN supported Amani Creatives through mentoring, building partnerships and networks, growing the group’s skills in marketing and production. CAN assisted the group to submit a successful application to Arts Council England for Amani Live, a project to grow the profile, networks and employability of 23 African-heritage artists, working in partnership with Brighter Sound and Band on the Wall. 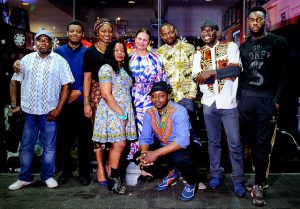 Amani Live was acclaimed as a unique contribution to the region’s music scene and their final showcase at Band on The Wall, headlined by the award-winning Cameroonian singer Coco Mbassi, was a huge hit with an audience that included funders, music specialists, and promoters.

Through the success of Amani Live, the company secured paid creative opportunities for 12 Amani artists to perform and showcase their work at local festivals and events.