Manchester International Roots Orchestra (MIRO) caught the imagination of audiences, and in 2016 CAN and RNCM went on to support MIRO to develop as an independent arts organisation and charity, and access Arts Council England funding to support a period of new music development and a national tour. 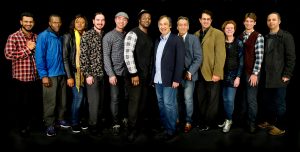 “The fusion is so rich, so fine. We have developed this family relationship.”

“It has been another step for me to progress my own music particularly with the diversity and opportunities to work with high quality musicians and to learn from their styles.”

The residency supported MIRO to develop their producing skills, from managing the logistics of touring, to building partnerships, growing their profile, and evaluating their work.

The performance at St John’s Church at the Fringe Festival in 2016 was widely critically acclaimed and received a five-star review.

“Mesmerising for the ears.”

MIRO’s Remi Adefeyisan attended the international World Music Expo WOMEX in Santiago de Compostela, Spain in 2016, which led to new connections and opportunities for the orchestra.

Remi was selected as a MIF Jerwood Fellow and was one of 12 young Producers taking part in the Old Vic’s Producer Programme.

The orchestra was profiled in a film as an example of the best intercultural co-production practice developed by CAN, together with the Dutch arts organisation, Vrolijheid. The resulting film was screened at the Leeuwarden Film Festival in 2017.