The Petrus Shop in the Exchange shopping centre

In 2018, CAN created the Hidden Tales arts trail in partnership with Rochdale's Petrus Community which works with homeless people.

Hidden Tales captured the stories of the Petrus Community – the people using its services, its staff and volunteers.

The project explored stories of addiction and recovery, mental well-being, and the hope and resilience of people too often living at the margins of society.

Hidden Lives empowered eight people to share their stories in their own words and on their own terms in a series of powerful films. The project challenged audiences to re-think homelessness and the stigma surrounding it.

The project featured the work of the people of the Petrus Community together with the award-winning filmmaker Mat Johns, musician Kevin MacLeod, the poet and MC Martin Stannage aka Visceral, with graphic design by Mark Brown.  Hidden Tales was produced by CAN’s Digital Producer, Sara Domville. 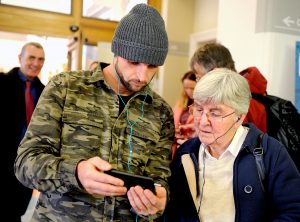 The Hidden Tales project developed eight artworks sited in Rochdale‘s town centre. Each artwork featured a poem, a portrait, and a QR code taking visitors to a series of films with the stories of eight individuals who had experienced homelessness or volunteered with the homeless community.  The films were moving, intriguing, and sometimes humorous to show the human spirit of resilience and hope.

Between 3 – 28 October 2018, visitors could pick up a map from Touchstones Rochdale to take them on a journey, through a site-specific digital arts trail, around the town centre seeing Rochdale through the eyes of the Petrus Community, and discovering their stories in places with a resonance to them, and where thousands of passers-by would see the works each day.

The project ended with a sell-out sharing event at Touchstones Rochdale as part of the Rochdale Festival of Literature and Ideas, hosted by the acclaimed Manchester poet Mike Garry, featuring spoken word, music, performance together with a screening of the project’s films.

Hidden Tales was funded by Arts Council England and The Granada Foundation.