CAN's Artist-in-Residence during 2017 - 2018 was the Iranian Writer, Director and Performer, Fereshteh Mozaffari.

CAN supported Fereshteh Mozaffari to secure Arts Council England funding. Through this funding, and with CAN’s support, she created, rehearsed, and performed her first solo theatre piece One More Push. Fereshteh was supported to develop the script of One More Push with Writer/Theatre-Maker, Rani Moorthy. The performance explored the themes of dislocation, exile and settlement, identity and femininity using autobiography, personal testimony, storytelling, theatre, movement, dance, and song. 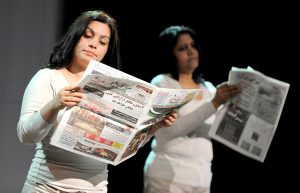 The residency helped Fereshteh to develop her creative producing skills and to run a successful marketing campaign for her performances.

One More Push was performed at Bristol’s acta festival and the University of Salford’s New Adelphi Theatre, and Manchester’s HOME as part of 2018’s Refugee Week. One More Push built a significant rapport with a wide and diverse new audience and was watched by MIF’s Artistic Director, John McGrath.

“I remembered back home. It reminded me of my childhood and coming to the UK. It really explained why many Iranians left the country.”

“A born performer and storyteller…moving, inventive, truthful storytelling of the highest order.” 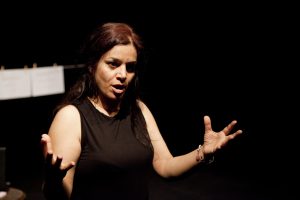 Taking a creative concept, developing it, staging it, and performing it at high-profile theatres and art festivals significantly grew Fereshteh’s confidence as a new performer. Through her residency with CAN and our networks, Fereshteh built connections and promoted herself to other theatres and festivals.

“Through this project, I’ve made new links with arts venues like York Theatre Royal and the Royal Exchange Theatre and other arts organisations such as Commonword, Eclipse Theatre, Acta/React and received commissions and invitations to perform at Journeys International Festival and the Push Festival at HOME.”

Fereshteh has gone on to found Sheba Arts, a minoritised women-led organisation that works with new migrants, refugees, and host communities. Fereshteh’s subsequent development saw her enrol in professional choral training with the internationally acclaimed Arash Fouladvand, a conductor with the Paris-East Philharmonic Orchestra. 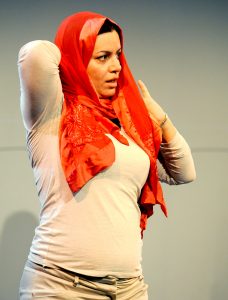