During 2017 - 2018, CAN supported the multi-disciplinary Iranian artist Mahboobeh Rajabi to develop her partnerships with venues and arts organisations.

CAN has had a long history with Mahboobeh since she first settled in Manchester in 2010. She shares our belief in a genuine democracy in working with communities and her fellow artists. 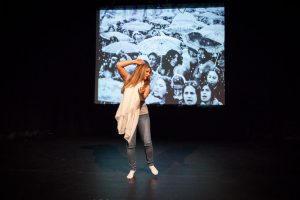 The residency supported Mahboobeh through mentoring and gave her a space for the development of her creative ideas as well as connecting her to wider opportunities. CAN provided free and valuable rehearsal space – so often a barrier to performers – as well as access to CAN’s digital studio. The residency supported Mahboobeh to structure an application to Arts Council England to develop DIPACT and tour its work. The project had significant interest from cultural partners including HOME, MIF, ArtReach and Commonword. Unfortunately, in the highly competitive arts funding environment, her application was unsuccessful. Part of CAN’s work through its artist residencies is to encourage artists to develop the necessary resilience to build their careers and the collective went on to develop and perform their co-created piece for 2018’s Japan Day. 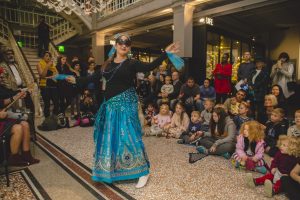 During the course of Mahboobeh’s residency with CAN, she was supported to create her solo performance Dancing the Lash with script development, dramaturgy, and direction by CAN’s then Creative Director, Cilla Baynes MBE, and Cheryl Martin. Dancing The Lash explored the position of Iranian women through the ban on dance in Iran. The piece was performed at Manchester Museum for Journeys Festival International and in 2018’s REACT Festival, the international festival of community theatre in Bristol.

The oppression of women in her native Iran is a subject that Mahoobeh has returned to again and again.

Mahoobeh’s career continues to thrive including work with Commonword as Digital Literature Co-ordinator to create the first Digital Literature Map of Manchester, in partnership with Manchester City of Literature. She regularly speaks at seminars and events including WHO Europe exploring migration and health. As a future leader, she was awarded a Clore Leadership coaching placement.