Members of the Petrus Community presented an eclectic mix of short films, spoken word and live music at Rochdale Literature and Ideas Festival at Touchstones Rochdale.

Members of the Petrus Community presented an eclectic mix of short films, spoken word, and live music at Touchstones Rochdale on Thursday 20 October 2016 as part of the Rochdale Literature and Ideas Festival.

The sharing was part of Hidden Tales, a project developed in partnership between Petrus Community and CAN, which told the stories of homeless people.

People from the Petrus Community worked with the award-winning Filmmaker Mat Johns, and Digital artist Mahboobeh Rajabi to create eight short films sharing stories of struggles with mental well-being, addiction, and recovery.  Films ranged from a video portrait of Petrus volunteer Martin and his love of the Incredible Edible Allotment to the moving story of the Rochdale Carers Choir through to films that shared an insight into the realities of life on the streets.

The Poet and MC Martin Stannage worked with the group to create poetry inspired by Northern poets from the Rochdale Maskew Collection, to Carol Anne Duffy through to Simon Armitage and Lemn Sissay. The poetry was performed live to a sell-out crowd and the poets were joined by Musician Chris Brown who performed original songs inspired by the themes of Hidden Tales. People associated with the project including Martin Tobin, Roger Kirby, Charlotte Brackenbury, Frank Kelly, Deborah Simonaitis and Chris Brown took to the stage to the appreciative audience.

This event was just one aspect of an 18-month creative programme, which culminated in 2017 with a live event and a unique Digital Trail which took people on a journey through Rochdale’s town centre sharing the untold stories of eight people from Petrus through images, writing, and a QR code link to a video portrait of each person on a specially created website.

The project was funded by Awards for All and Arts Council England. 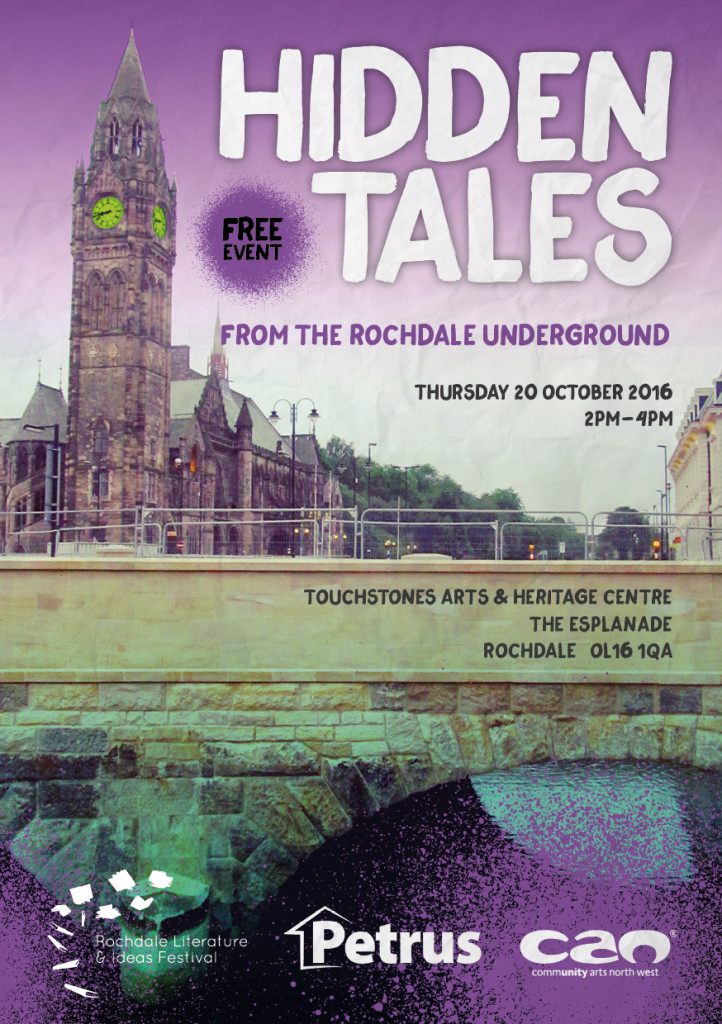