In December 2021, CAN partnered with Rochdale Youth Service to work with groups of young people to create artwork to accompany the stunning installation – GAIA – Earth Artwork – by the internationally acclaimed artist, Luke Jerram.

GAIA, a seven-diameter to-scale model of Planet Earth created using NASA photography from space, has toured to countries including China, Australia, Slovakia, and Italy. The artwork was shown at Cornwall’s Eden Project, Cornwall in Winter 2020, and was exhibited alongside COP26 in Glasgow in Autumn 2021.

In a series of workshops, young people from Rochdale explored themes inspired by the climate emergency to create a series of hanging globes which were exhibited alongside Jerram’s artwork.

The group created Postcards to Planet Earth which attached to seven paper globes and included their own creative writing and messages such as Stop Using Plastic as well as images of deforestation, desertification and flooding.  The globes will travel back to youth centres across the borough as lasting messages of hope for a new generation of climate activists.

Exhibited in Rochdale’s Number One Riverside in the run-up to Christmas, GAIA – Earth Artwork was a highly anticipated event. Free to view, the installation attracted 1000s of people. 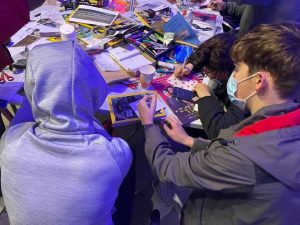 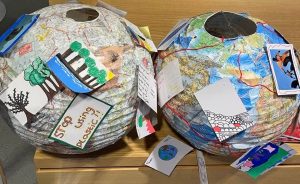 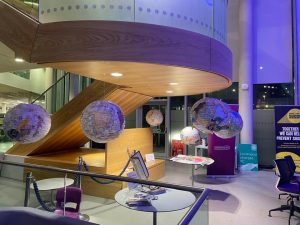 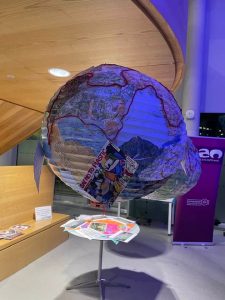