Eight artists from new migrant backgrounds, including those who have experienced forced migration, have been recruited to the innovative programme, Pushing Boundaries, created by CAN and Curious Minds, to support artists to develop skills and networks to work in UK schools.

Pushing Boundaries is a pilot project funded through Curious Minds Partnership Investment Programme in response to the lack of opportunities for artists from new migrant backgrounds in schools and education.

From Autumn 2022 to Spring 2023, through training, mentoring and school placements, the eight artists will be supported to grow opportunities in developing and delivering creative workshops in UK primary and secondary schools. Artists will have practical experience in delivering creative sessions and develop a deeper understanding of art in education.

Pushing Boundaries connects artists to a range of Greater Manchester schools, and each artist has been matched to a specialist mentor who already delivers schools-based arts projects.

Fares Farraj is a dancer originally from Palestine. He has taught and facilitated creative sessions for children and young people, in Dabke, the Palestinian national folk dance.  Fares has volunteered and worked at refugee camp co-operatives, schools, community centres, and summer camps working to preserve Palestine’s culture against the background of military occupation. He has worked with Ashtar Theatre and completed Dabke courses at the Popular Art Centre in Ramallah. Fares was a dancer with the leading Palestinian Dabke troupe El Funoun Palestinian Popular Dance Troupe which has performed in over 30 countries.  Since coming to Manchester, Fares has taken part in the Celebrating Syria Festival teaching Dabke dance to beginners.  He is studying for a BA in Psychology at the University of Salford. 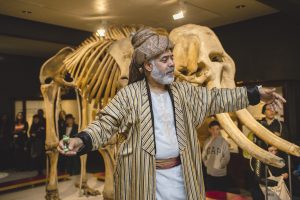 Abas El Janabi is a theatre maker and director originally from Iraq, now based in Manchester.  He has also worked as an actor, writer, storyteller, and a theatre designer for theatre.  Abas has a BA in Acting from the University of Baghdad, and a BA in Performance Design and Management from the University of Manchester and has since gone on to gain an MA in Theatre Studies there.  Over the years, Abas has worked with many of Manchester’s cultural organisations and with CAN, notably on our Horizons festival. He is currently working with Manchester Museum mentoring young people to create art based on objects from the museum’s collection.

Amang Kamal is a Kurdish visual artist and videographer, originally from Iraq, and now settled in Stockport.  He trained as a visual artist in Iraq and has a BA in Fine Arts from MMU. Amang has wide-ranging experience with Greater Manchester’s cultural organisations including work with CAN and HOME as part of the Horizons Festival. He is currently volunteering as an artist at the Culture Bridge where he delivers workshops with asylum-seeking, refugee, migrant children and young people including those who have recently arrived in Greater Manchester.

Valeriia Lukianets is an actress, dancer, acting and stage movement teacher from Ukraine, who has travelled widely throughout her creative career. She has appeared in films and TV series on Ukrainian TV. She has a BA in Acting for Theatre and Cinema from Kyiv National University of Theatre, Cinema, and TV.  She is also a trained dancer. Valeriia taught stage movement at Kyiv Academy of Arts working with children and young people aged 10 to 18 years.

Parisa Pirzadeh is a musician originally from Iran.  She has an MA in Music Performance from Tehran Art University. Parisa has worked with children and young people for more than 10 years. In the UK, Parisa has taught the violin as a supply teacher.  She wants to gain a deeper understanding of the British education system and further develop her career within it.  Parisa developed music for the book “My Dad Is Not Superman” for bilingual children where she played all the instruments and performed the vocals. She has worked with Brighter Sound as a support facilitator with young people aged 14 – 18. She has streamed her music on social platforms including Spotify, Soundcloud and Amazon. 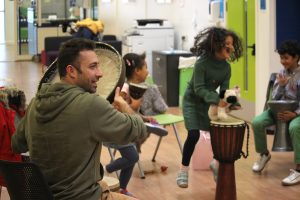 Arian Sadr is a Persian percussionist who specialises in Persian drumming. He has run workshops in various educational settings from schools to universities as well as working with communities in Manchester and the North West for the past 10 years.  Arian has explored other art forms such as visual art fusing it with live experimental music where he has collaborated with visual artists, musicians, and contemporary dancers.  He has worked for many cultural organisations, including with Music Action International on their Harmonise Project working with school children to create their own songs.

Fariba Taghypoor is a musician, singer, and educationalist. She came to the UK from Iran where she was a school music teacher for 15 years.   She has a BA degree in Western Classical Music and an MA in Iranian Music. Fariba has taught piano, violin, the Iranian Tar and Tanbour.  Fariba also teaches singing and has run award-winning school choirs. She’s a member of the Hamdel Ensemble singing and playing the Tanbour and her performances have included a concert at the Edinburgh Fringe Festival.  Fariba is a member of MIRO in its MIRO Hub and MIRO Connect projects. 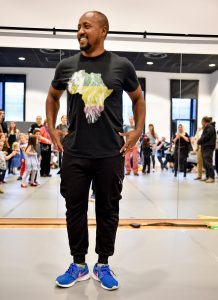 Masresha Wondmu is a dancer, choreographer, and circus artist from Ethiopia.  He has worked in combined art forms in circus and dance for 18 years and has continued his work since coming to the UK working as a facilitator in circus and dance for Spare Parts at summer festivals. He has also worked with CAN in Manchester Libraries, the Horizons festival, HOME, and with Circus House community circus as a freelance performer and trainer in locations across Greater Manchester, Cheshire, and Lancashire. Masresha has worked as a sports coach in gymnastics in primary schools in Manchester and Stockport and works for A Star Coaching.

Specialist highly experienced mentors have been appointed to the project.

Magdalen is the founder and CEO of the Manchester-based charity Afrocats which works with refugees and asylum seekers who face discrimination and experience trauma.

She has had a long association with CAN both as an artist and team member. Magdalen also works with Curious Minds, Manchester International Festival, The Whitworth, and schools across Greater Manchester. Her work includes the delivery of the primary schools’ programme for Little Amal – The Walk.

Ben was the Youth Theatre Director at Collective Encounters.  There he developed the project Where You’re At for young people from migrant backgrounds, many of whom were unaccompanied refugees/asylum seekers.

He was a Curious Minds CASE (Culture & Arts Specialists in Education) Fellow between 2019 – 2021.

Ben is currently Writer in Residence at Beckfoot Oakbank School in Keighley with First Story since 2019. He regularly freelances with Create Arts and Stockport ARC.

She has delivered education programmes for Early Years at Halton Borough Council, in Secondary schools for the Inspired Responses programme at The Brindley, and in Primary schools for St Helens LCEP.

Claire was commissioned by Cultural Hubs St Helens Arts In libraries to create What are you waiting for? and by Heart of Glass for Walking Together/Walking Apart with Refugee Women Connect.

Originally from Mostar in Bosnia and Herzegovina, Sanja has worked in music education and participation in the UK for CAN, MIF, MIRO Community Projects, 6Million+)

Sanja has worked in high schools and colleges in Austria and the UK.

Between 2018 – 2022, Sanja was the Programme Coordinator for Music Action International’s Harmonise NW.