We’re very excited about the events for the Horizons Festival 2021 Saturday 12 – Friday 18 June with our friends at HOME.

One of the highlights of the festival is a workshop/discussion on the proposed legislation for the asylum system.  It’s a don’t miss!

Join people with lived experience of the asylum system from Refugee Action’s RAS Voices, together with campaigner, Julia Savage from Asylum Matters to explore the impact of plans for the biggest overhaul of the asylum system in twenty years, which threaten the very right to seek asylum in the UK. 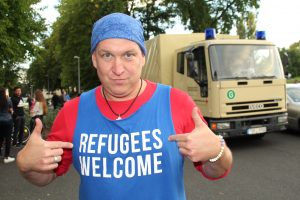 People will be invited to take part in a campaign action to stand #TogetherWithRefugees at the end of the workshop, and are invited to make signs for the purpose, inspired by the logo of this coalition campaign seeking to change the narrative about refugee protection in the UK, or other messages of solidarity or welcome.

More about the hostile legislation here

Lost Lands Film festival which specialises in films created by refugees, asylum seekers, and migrant heritage people have brought together a range of films from across the world exploring some of the most important issues in the most creative and unexpected ways. Expect the unexpected and be prepared to be inspired to act!

Kofia: A revolution through music + Q&A

With an introduction by Director Louis Brehony, the short film Kofia; A Revolution Through Music is the inside story of Europe’s first Palestinian band, told through music, memories, and revolutionary encounters.

It’s followed by a Q&A with Director, Louis Brehony, Professor Anandi Ramamurthy, Sheffield Hallam University, Member of Cinema Palestino, and co-author of ‘Struggling to Be Seen: The travails of Palestinian Cinema’.

Home in a Foreign Land + Q&A

‘Home in a Foreign Land’ is a documentary that shares the stories and dreams of people enduring forced emigration from Central America. It also tells the stories of those who have remained in their countries resisting and transforming their realities.

The Casa del Migrante de Saltillo, in Coahuila, in northern Mexico, is a meeting place for these stories, where different migrants come together looking for a safe place to rest and regain their strength before they attempt to cross into the US.

The documentary exposes the factors of expulsion forcing people to leave their countries, the increasingly violent and repressive controls to stop migrants, and the solidarity across borders.

This exhibition responds to the festival’s theme – We Cannot Walk Alone – taken from 1960s US Civil Rights Leader Martin Luther King’s iconic I Have a Dream speech.

The workshops were led by artists Hasret Brown, Manya Alkhmri, and Khalida Alkhmri, and responded to the festival theme through a collaborative process between the artists and community members.