Audiences were delighted to be reconnected with live music at a small, intimate and socially distanced performance by Seyed Ali Jaberi and the Hamdel Ensemble after a break of 16 months away from performing live.

Music fans the world over have missed seeing music performed on stage during lockdown.

The CAN team is no exception.

We were absolutely delighted to be part of the team together with Manchester Libraries and Crossing Footprints, to present Seyed Ali Jaberi and the Hamdel Ensemble‘s music with live audiences at Manchester Central Library’s performance space on Saturday 17 July 2021. 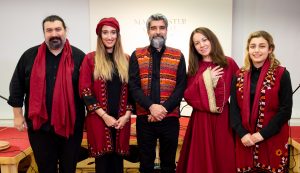 Seyed Ali Jaberi reflected on the emotional experience of performing to a live audience again:

“Playing a live performance once again really cannot be described. My last performance was exactly one month before the first lockdown started on Friday 13 March 2020. Before that, I’d performed live every month of the year.”

“Like every musician, I really lived with my audience by playing to them.  The best part of performing live is seeing people’s reactions to the music you’re playing.  Their emotions…everything. It’s indescribable how that makes you feel.  I can say in some ways the last 16 months was like the end of life, but during that time I also learned a lot of life lessons.”

“And I’m delighted to say that I will be playing live at different places in the UK from September onwards.”

We asked Seyed if he was tired after the performance and he told us:

We’d forgotten just how wonderful the live experience is! Here are some photographs from the event.

This event was just one of CAN’s series of events celebrating Libraries of Sanctuary where three library services – Manchester, Bolton, and Oldham – have now received the Library of Sanctuary Award as part of this national movement.

This event was presented by CAN, in partnership with Manchester Central Library and Crossing Footprints.