Saturday 5 June marks the one-year anniversary of Manchester’s Black Lives Matter demonstration. Thousands of people gathered in Piccadilly Gardens and the city centre in powerful solidarity with people across the UK and internationally rallying against the killing of Black people by the police and against racism, racialised inequality, discrimination, violence, and oppression.  Shirlaine Forrest who regularly photographs CAN’s events was at the demonstration, and she shares some of her powerful photographs here.

One year on, join CAN, CivicLeicester, Manchester City of Literature, and Manchester Poetry Library for the FREE launch of the ‘Black Lives Matter: Poems for a New World’ anthology (edited by Ambrose Musiyiwa) between 5.30pm – 7pm on Thursday 10 June as part of The Festival of Libraries (Wednesday 9 – Sunday 13 June)

‘The BLM Manchester protest was an incredibly powerful and positive event.  One speaker, in particular, brought me to tears – her knowledge, passion, and energy was overwhelming, and to see thousands of people gathered to listen respectfully to this young woman’s voice was a true moment.”

“It also hammered home the gaps in my education, so I used the protest as a jumping-off point to research issues more thoroughly.  Thank you to all those who permitted me to photograph them, and to everyone attending for opening my eyes and ears.  You are seen, you are heard.” 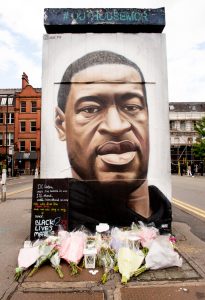 ‘It was important for me to see the impact George Floyd’s life had on so many people.’

‘It was inspiring to see thousands of people out there who recognise what is going on in the world in relation to BLM. While division and lack of dialogue is a reality within different demographics in the UK, I was proud to see different races and ages stand together to make a clear and vivid point to the powers that be an injustice anywhere is an injustice everywhere and there is unity within communities. It is important that our action doesn’t rest alone on demonstrations and protests, but rather dismantles the everyday habits and ways of living that help support injustice.’

Gabriel, one of the poets appearing in Thursday’s event.