Rochdale’s homeless community speak up and out.

A sharing event at Touchstones celebrates the success of the Hidden Tales project.

People from Rochdale’s homeless community took to the stage at Touchstones Rochdale on Tuesday 17 October, performing to a packed-out venue to share their personal stories through poetry, music and a series of short films sharing the stories of the people taking part in the project.

Taking place as part of the Rochdale Literature and Ideas Festival and hosted by Mancunian poet, Mike Garry, the event was inspiring and unique telling real-life stories of strength, survival and self-discovery in life’s most challenging times.

The event was a culmination of Hidden Tales, a digital arts and performance project in which CAN collaborated and worked with service-users and volunteers from Petrus Community, a charity working with people who are homeless or at risk in Rochdale, Rossendale and Oldham.

“Over the last 18 months, I’ve seen the people taking part in Hidden Tales project grow and develop their confidence as artists. To see them get up on stage and perform so incredibly well in front of so many people was just brilliant and very rewarding. On behalf of CAN, I’m thankful to each and every one of them for having the strength to talk so openly and share their personal life experiences.”

“With stories shared about mental health, addiction and recovery, the Hidden Tales event raised awareness and understanding around a range of important social issues, which are often misconstrued and misunderstood.”

“The event was enjoyable and entertaining but, crucially, it also made you think, and provided a reminder of the importance of speaking up and speaking out about issues which matter and affect so many of us.”

The series of short films screened at the event told the stories of the people from the Petrus Community. The films can also be seen as part of the Hidden Tales Digital Art Trail Live around Rochdale Town Centre until 28 October and here. The trail includes eight unmissable artworks on display in public spaces, and feature a poem, a portrait, and a QR code to people’s films.

Hidden Tales is supported by Arts Council England and The Granada Foundation. 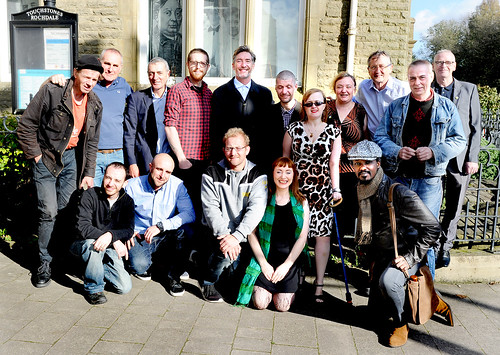